Our threat assessment professional in the story learned that Derek had a significant amount in common with people who have committed violence.  In short – Derek not only made a threat, but he actually poses a threat.

This is where the process of threat management becomes essential to reducing the risk and managing the situation.  Because I will tell you – the thought process of “we can just call the police or get a protection order,” is not going to manage the threat.  In fact, both of those actions are highly intrusive and have a high likelihood of actually putting fuel on the fire.

There are times when the police need to be called, but Just think a 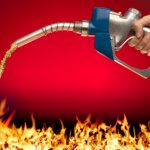 bout what it would be like to call the police on Derek in the story.  If you didn’t read the last post <here>, essentially all Derek did was get mad as he left work and mumbled loudly how he was going to burn the place down and kill everyone in it.  He committed no crime and can easily deny he meant anything he said.

What are the police going to do?  And since we now know Derek has a lot in common with people who have committed violence, don’t you think it is possible the police interaction would increase Derek’s justification for violence?

Not to mention, Derek still works at the company.  Are you going to suspend him?  If so, are you confident you can justify that move?

Ideally, you need a team to answer these questions.  The team clearly needs to have the threat assessment professional in the room, but who else?  Some leadership perhaps, but not necessarily.  Human Resources?  Legal?  Risk Management?  Perhaps you can think of one or two more.

No matter who is at the “threat management table,” the team will want to be sure think through each step with the lens of being least intrusive and least escalating.  At the same time, having Legal and Risk Management in the room will be sure the company doesn’t open itself up to liability.

The threat assessment professional should always be the voice of deescalation, even if it is difficult for others on the team to grasp.  I have heard these questions before:

It is natural for people to want to take action when they face a problem, or at least have somebody take action.  But what if the threat assessment professional says things like, “we need to make Derek feel like he won?”  That is just hard for some to grasp.

Threat management might appear counter-intuitive at times.  Threat management may need some “out of the box” thinking and creativity.  But think about the goal – you have to somehow reduce the risk Derek will commit violence at your company.  He either needs to no longer feel justified for violence, or he needs to get a stronger fear of consequences in his life, or he needs to have alternatives to violence at his disposal.  Any of those goals are most likely not achieved by direct confrontation, a protection order, or a conversation with a police officer.

I hope I have planted a seed of how complicated the threat management process is.  Stay tuned for some more examples, insights, and understanding!